Road to Nowhere Snowmobiling on Langjökull

“Time to drive everyone!,” says our mountain guide for the day, pointing at a bunch of snowmobiles parked in an orderly manner next to the base.

I’m not a fan of people who drive like they’re in Formula 1, and I don’t even have a driver’s license. The only thing I find myself comfortably steering is a conversation, so it’s with no surprise that I feel a rivulet of cold sweat trickling down my spine at the thought of driving a snowmobile. This is the day I die.

Once in a lifetime 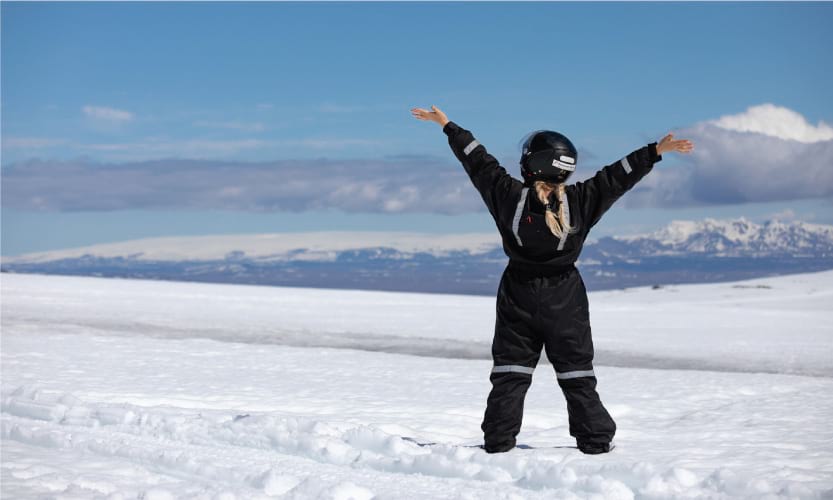 Luckily I’m also not used to saying no to a once-in-a-lifetime opportunity so I ask John, an American gentleman, whether he’d be so kind as to let me jump on the back seat of his snowmobile.

He politely accepts and, slightly impaired by my child-size, Michelin-Man-inspired suit and heavy helmet, I hop onto the snowmobile grabbing the side handles as if my life depended on them. Then, all of a sudden, the engines of eight snowmobiles roar at unison, and down we slide onto the blanket of snow that permanently covers the Icelandic glacier Langjökull.

I need only two minutes on the snowmobile to get cocky. As I poke fun at myself for my overly-dramatic demeanour, I tell John not to hold back. Immediately, he sprints forward and upwards, racing behind our guide, taking curves that are not there and hopping over humps of snow. 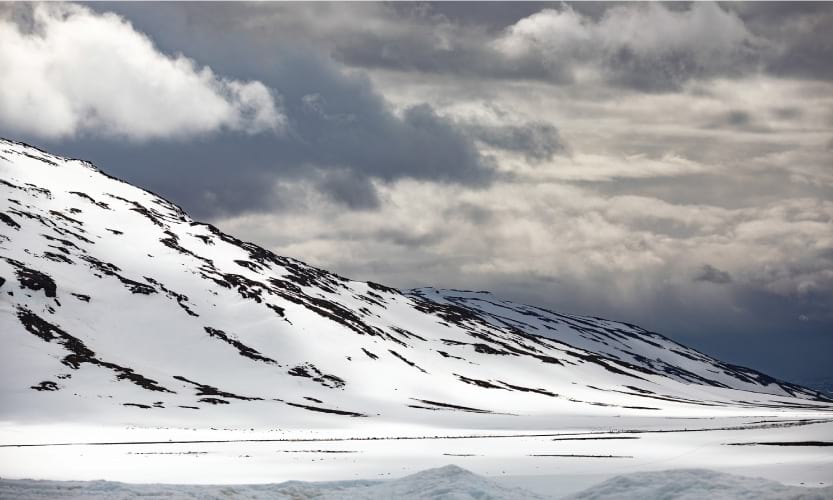 The sun plays peek-a-boo through the clouds, often blinding my vision as I try to distinguish the low sky from the fluffy snow around me. To my left, the valley extends below us with its undulating rivers and hills—a surreal view that at once frightens and excites me. The occasional black peak appears in the distance, and every time we swerve my heart hops up and down, beating incessantly behind my ears.

It’s been raining for weeks on the south coast when we decide to visit Langjökull, so we already don’t expect great weather. But as we reach the 1090m mark in altitude, black clouds are starting to gather around above us. “We are now standing above 500 meters of ice,” our guide says as we all step down the mobiles for a short break. “But we won’t stay here long.” He, too, has seen the clouds. 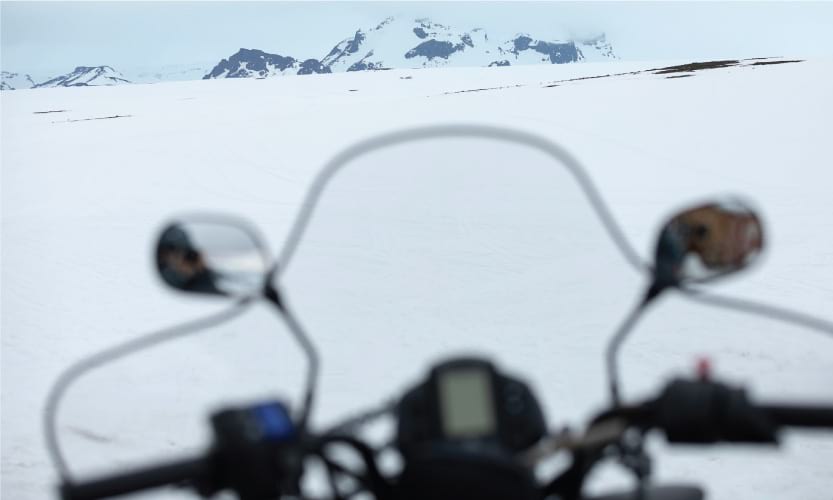 Eager to start a different kind of adventure against the elements we all hop back on our snowmobiles, but the ride back is considerably more difficult. As John races forward we take a wrong turn and before we know it the snowmobile is on top of us, its weight crushing our legs as we sink into the 30 cm of snow.

I panic. I’m not hurt, but my foot is stuck and it’s starting to rain heavily on the shield of my helmet. I feel the snow slowly creeping into my shoe, but it’s not long before John manages to wiggle out and after what seems like forever I’m free, too. As I turn around I notice at least three other snowmobiles have also rolled over onto their drivers, but just like me, everybody seems to be just fine, smiling, laughing and ready to drive back.

Panic forgotten and crisis averted (hurray for the mountain guides!), it seems like our little accident has taught us nothing: so on we go, driving even faster onto the snow, as the skies open up above us and more rain pours onto our path. We’ve been out for one and a half hours but it feels like minutes, and as we roll back in line into the parking lot I smile like it’s Christmas. I felt alive on those mountains and I suspect part of me will stay there forever.

If you want to check out any Glacier during your stay in Iceland, Reykjavík Sightseeing offers a variety of tours depending on your budget and schedule. Check out their website! 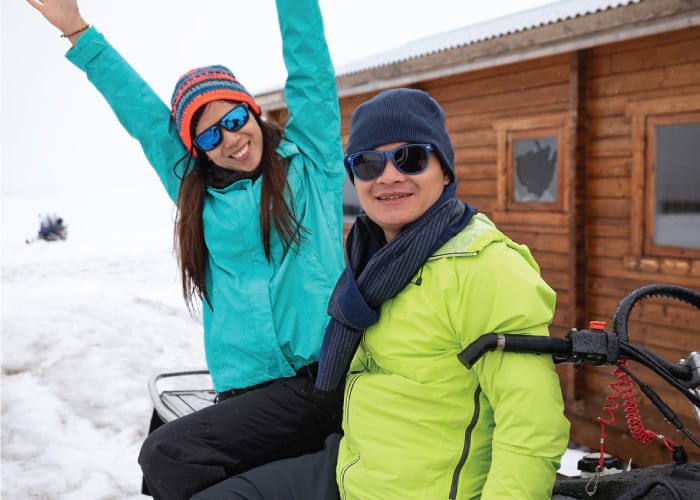 Names: Yani and Wing
From: China

What are you guys doing here in Iceland? “We got married a few months ago,” Wing explains. “So this is our honeymoon!”

Congratulations! Why did you choose Iceland? “We heard this country was beautiful, just amazing to see,” Yani says. “So we decided to come here. This is actually our first time in Iceland.”

What have you been doing so far? “This is our second day here so we haven’t done a lot yet,” Yani explains. “But yesterday we went to see the Golden Circle.”

And what will you be doing next? “We’ve planned a whole tour of ten days here,” Wing explains. “We did snowmobiling today and then we’d like to take a trip around Iceland later this week.”

So did you enjoy snowmobiling on Langjökull? “Very much,” Wing says, smiling. “Today it was beautiful out there.”
“Me too,” Yani adds. “I think teamwork is very important when doing things like this, especially in bad weather, and I got a lot of help from the others while we were out there.”

Did you get scared? “Nah,” Yani chuckles. “I was definitely more excited than scared!” 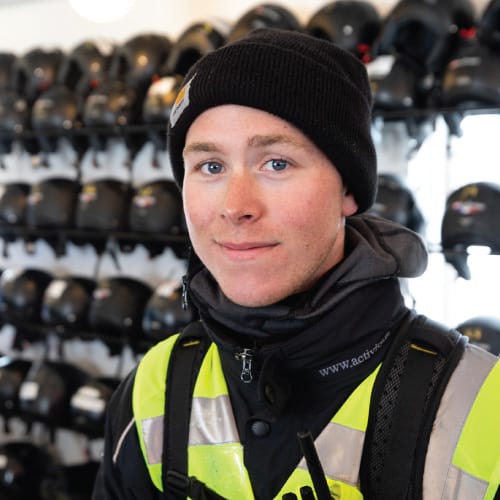 Name: Aron
Age: 24
From: “I’m from Hella, a town in the South of Iceland.”
Occupation: “I work as a mountain guide for Mountaineers of Iceland here at the snowmobiling station on Langjökull.”

How long have you been working here? “I’ve been here almost six years now,” Aron says. “I started doing this when I was eighteen, while I was still in school and I could only work here during weekends and holidays.”

Why did you decide to become a mountaineer? “I had never really thought about doing this kind of job before I actually tried,” Aron explains. “But then I met some people who were doing this kind of work, and when an opportunity arose to actually try it out I just said yes. After my first day doing this I immediately knew I didn’t want to go anywhere else.”

What’s your favourite part of the job? “I’d say definitely being outside a lot,” Aron says, smiling. “Being in nature, meeting new people every day… Every day is always different, you know? You have different weather and different people all the time, so I’d say that’s definitely the best part.”

What’s the most exciting or dangerous adventure you’ve had here? “So, we do two kinds of tours here—one with regular snowmobiles and then one with more powerful vehicles for experienced drivers,” he explains. “I’ve been on tours that are six days long, and I think that’s the most exciting thing I’ve ever done. You can learn more on the snowmobile because you’ve got more time, and you can go further—into the mountains, into the highlands and better discover the glacier.”

Have you ever been stuck during one of these tours? “Yeah definitely,” Aron laughs. “I’ve gotten stuck in cars or under snowmobiles but, you know, sometimes there is nothing else to do but just get yourself out of there and start again.”

THESE TOURS INCLUDE VIEWS OF LANGJÖKULL GLACIER

See some of the most beautiful gems of Icelandic nature while riding in a Super Jeep. These jeeps, with their distinctive massive tyres, are a unique Icelandic invention enabling the locals to traverse rugged terrain, ford rivers and drive across glaciers

SNOWMOBILE AND THE SECRET LAGOON TOUR

Drive through the Geysir area in a custom made Super jeep. Take a rejuvenating bath in the oldest swimming pool in Iceland after a thrilling snowmobile ride on Europe's second largest glacier, Langjökull.